I take this opportunity to introduce you to my new denim ruffle shirt from bonprix.ro offering you a narrative and visual journey through the history of denim with its beginnings in Europe, only to cross the ocean to faraway America. Enjoying contemporary art afterwards and get to know some artists who have pushed creation to other heights. All this with the eyes of researchers and the innocent curiosity of a child wearing Mary Jane shoes in an outfit that seems to be start less and endless as if it was conceived by the creative mind of Vivienne Westwood in an interpretation by Maria Drob.

Denim’s origins may be traced back to Genoa, Italy, more than 500 years ago. The word “blue jeans” is derived from the French phrase “bleu de Genes,” which means “blue of Genoa,” and refers to a wool and cotton fabric. Despite the fact that we term them “blue jeans,” the pants have been produced from denim, a fabric whose composition has altered throughout time. The name “denim” may be traced back to late 16th century France when a fabric is known as “Serge de Nîmes,” or “cloth from the city of Nîmes,” was utilized. However, “Serge de Nîmes” was made of a combination of silk and wool, a composition that has led some historians to question the link to today’s denim, which is produced entirely of cotton. As a result, the origin of the name denim is still a source of debate, especially since a fabric with a diagonal pattern called nîm was also being produced in France at the time. Denim is the more costly of the two types of fabric, also the who grew popular throughout time. The most significant distinction is that denim was woven with one coloured thread (warp) and one white thread (weft), whereas jeans were woven with two coloured yarn.

The cloth was subsequently used to make pants, which were then sold at the Genoese port. The Genoese navy required clothing that could endure the everyday duties of sailors, which included anything from stretching sails to dusting the deck. The crew washed the garments by putting them in fishing nets and pulling them into the boat. The seawater and the sun faded the trousers with time, and they became very washed out.

Levi (Loeb) Strauss, a Bavarian emigrant who arrived in America in 1847 with his mother and two sisters, is credited with inventing contemporary jeans. At the beginning of 1870, Jacob Davis tailor from Nevada started to produce wear-resistant work pants utilizing a cotton fabric, denim (basically, the same fabric can be traced back to Serge De Nimes) copper rivets in his pockets for his mining clients, agricultural workers and farmworkers. Further on he approached Levi Strauss from who used to buy the denim fabric every now and then for financial support and just like that the association of the company Levi Strauss & Co with the blue jeans started. The jeans were made at home by the employee but since they were more and more requested the first factory was opened in San Francisco.

Denim from Country to Couture

Denim has long gone beyond the “pants’ borders” and more over the Western frontier. It has been decades since it was exploited in absolutely all types of clothing, from skirts to dresses, shirts, jackets, handbags and going to the extreme. Moreover, it came to make a sensation, to intrigue us or to stimulate our creative sense and imagination in haute couture collections.

Schiaparelli, Balenciaga, Ronald van der Kemp and Jean-Paul Gaultier are just a few who recently presented their vision for denim through a crystalized couture lens. They have demonstrated how the fabric can be elevated and repurposed to fit in the realm of couture.

Schiaparelli house applied its Midas touch to denim with golden embroideries and Surrealist ornamentations in a collection called “The Matador.” Intended to push past boundaries of what couture is, creative director Daniel Roseberry stated in the collection notes that he “felt the freedom to make something fiercely, undeniably, unapologetically pretty—because sometimes you have to rebel against beauty in order to return to it.

Among the designers that recently showcased their denim vision from a couture perspective are Schiaparelli, Balenciaga, Ronald van der Kemp, and Jean-Paul Gaultier and these are just a few. They’ve shown how the cloth may be upgraded and reused for use in the couture world.

In a collection named “The Matador,” Schiaparelli put its touch to denim with golden embroidery and Surrealist ornamentations. “I felt the freedom to make something fiercely, undeniably, unapologetically pretty. Because sometimes you have to rebel against beauty in order to return to it. Give me more beauty, more earnestness, more romance, more effort. I hope this collection reminds everyone who encounters it of the sheer delight that fashion can bring us in hard times, and with it, the promise of more joy when the clouds part. Give me more fashion. Give me more hope.” creative director Daniel Roseberry said in the collection notes.

Designer Ronald Van Der Kamp continued his upcycling experiments with blue jeans. Denim woven strips and flowery denim appliques were used to create a cropped jacket. To produce a cage-like skirt, a looser weave was employed. Denim shreds were utilized to imitate the look and feel of faux fur on a cubby jacket, while accordion pleats provided drama to striped wide-leg trousers.

Celebrity designers weren’t the first thought, I recall the semi-final episode of Next in Fashion on Netflix having the theme “Denim” – assessed by Tommy Hilfiger himself.

So, for the semi-final, the remaining four designers are faced with a denim challenge. Denim is one of the world’s most popular textiles, and it makes perhaps the most personal statement when fashioned into everyday wear, work clothing, and more. Each designer is required to show two denim outfits that must complement one another, and each designer is provided with one male and one female model. Denim presents distinct challenges in terms of getting the cut right and presenting something the judges haven’t seen before.

The end outcome was truly amazing. Daniel Fletcher, a British designer, had a brilliant idea and a sustainable method that I found outstanding.

Denim couldn’t stay away from the contemporary art inspiring artists like Anna Weber from Germany and Ian Berry from the UK.

Anna’s aim for her works was to mix art and fashion to create something new with sustainability at its core and underlying the idea of repurposing.

After a while, clothing begin to convey stories via their everyday use. Stories about ourselves, others, and their own physical traits. They’ll remember things and become one-of-a-kind. As if it were a work of art.

That’s how she describes her work process: “The pictures are draped with whole garments on the floor, most commonly bottoms. I avoid destroying them, only to give respect to the clothes and to the work through other people. All pictures were taken with the mobile phone and then edited by photoshop. They only exist digitally.”

Many people mistake Ian Berry’s art for blue toned photos or indigo-colored oil paintings at first look. This is true not only when seen on the internet or in print, when much of the depth and detail is lost, but also when examined up close. Many viewers don’t realize they’re gazing at many layers and hues of denim jeans until they go close enough to touch them. With his imagination, he is creating a whole new universe. It’s just his paint, and what a material to utilize in our contemporary world, with all of its symbolism and dualities, as well as being such an ubiquitous article of clothing that links many people across the world.

When you look at them up close, you can see how each little piece of denim has been thought about and made out of jeans with washes and fades to help achieve that painterly tone. He paints despondent metropolitan landscapes, frequently reflecting the lonely or less glamorous aspect of city life.

He says “denim is now such an urban fabric, after having such rural origins. What better way to capture everyday urban life.”

That’s hard to think it all began with a single observation. Observing a stack of old pants and noting the different colors of blue. He quickly became one of the most talked about young artists after a few scissors and glue.

Keep an eye out for updates about upcoming concerts here.

Blue Denims are the most beautiful things since the gondola

Did you know that - In communist countries, the jeans symbolize "western decadence"?

Assessing fashion and iconic characters through the lens of cultural theory, with a focus on symbolism, art and anthropological references. Making connections between diverse things and thinking extensively about a particular topic is what my reflections entail.

Felt the freedom to make something fiercely, undeniably, unapologetically pretty 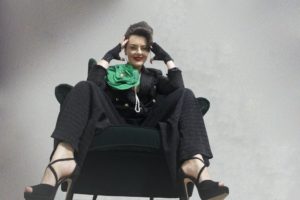 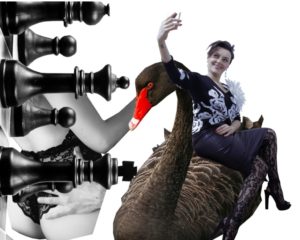 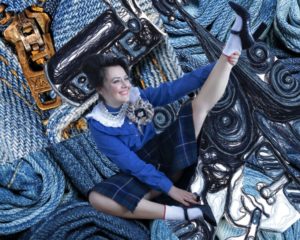