Iasi Tour - Tourist In My City 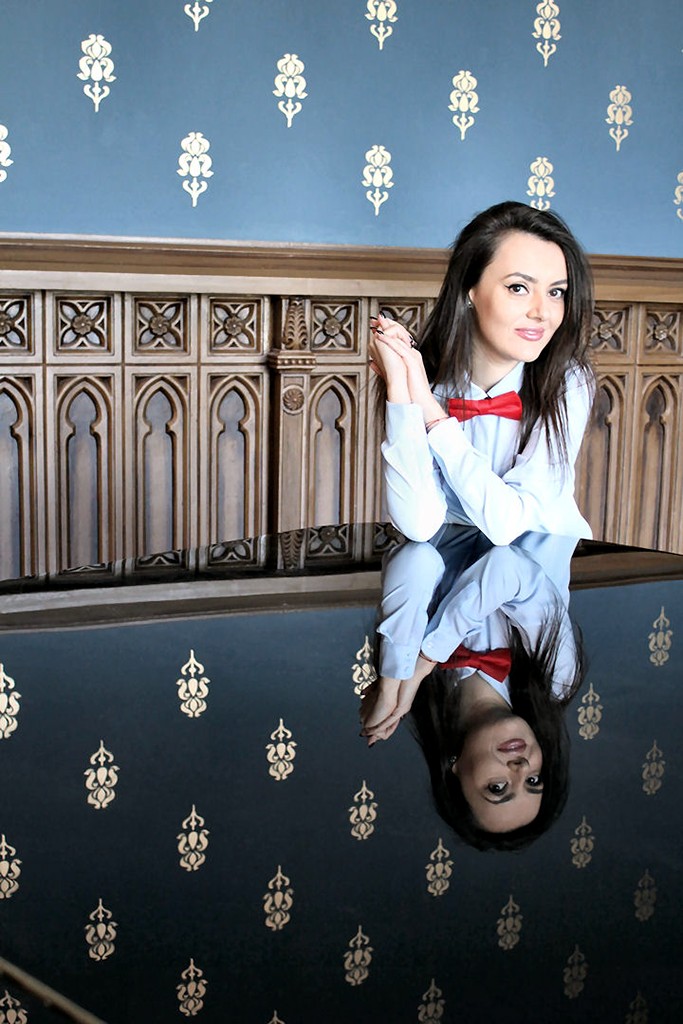 Early Saturday morning, we, the local bloggers, gathered together; some wearing a bow tie, some wearing a tie, but all somehow respecting the dress code. The meeting spot was in front of the National Theater of Iasi, “Vasile Alecsandri”.

Filled with excitement and emotions of knowing, we are about to enrich our knowledge and delight our retinas with some veritable artwork. Guided by our guides Victoria, Alex, and Matei from the Romanian Tourist Guide Association, we started with the first objective on the agenda: the “Vasile Alecsandri—The National Theater.
Overcoming the fact that the administration considers that the theatre does not need promotion… what ??? I say today, more than ever, the theatre needs promotion! And here I could list reasons without mercy, but I will say no more.

The administration of the theatre has changed, and the entire approach has changed.

For anyone curious, visiting the theatre costs 8 RON (about 2 dollars), and what you will discover inside is priceless. We are proud of having the oldest national theatre in the country, a true national heritage. From the entrance, the architecture will delight you. The great hall is a real spectacle in itself. The richness and diversity of ornaments, details, multiple reliefs, imposing furniture, and oil paintings are characteristic of the Rococo style. It is rightly included in the list of the most beautiful theatres in the world.

Did you know that “Vasile Alecsandri”-National Theater from Iasi is the only one in the country (Romania) that has the main curtain painted?

After a few forays into the history of the theatre with the representative of the institution and a photo session, we set off for the next stop.

I can surely say the clock was the leitmotif of the tour, being present in other buildings too.

Located on the old Ulita Mare (Grand Lane) of Iasi, it today hosts the current city hall, which, at least for us, proved to be an impenetrable fortress in the sense that any attempt to visit this building on the inside was denied. Well, at least we were able to enjoy the sun to the fullest, and our guides enriched our culture with some spicy and decadent stories. Despite its current leadership, this building played an important role in the political scene of the time, is perhaps the most historically significant, and has witnessed the most contentious alliances and bourgeois proms.
What I do remember, as a distinctive note, is that even then, as today, the ‘curse of love’ delighted and aroused public hostility and odium, except the protagonists were different…

Thus, in addition to the main agenda, we were able to admire an exhibition of a collection of cars that were majestically displayed in front of the Metropolis and which did not leave us indifferent.

The third objective on our list was the Catholic Cathedral, where we were greeted with great warmth by Mr. Emil Bejan. I am Orthodox. However, it is not the first time I have walked into this cathedral, and I must confess that it impresses me every time. Its sophisticated simplicity gives you a special feeling. In addition, the openness and kindness of Catholic priests or, in our case, the church guide, make you unable to refuse a future invitation.

The Cathedral of the Holy Virgin Mary Queen has an atypical, circular shape, with 24 warheads and a 10 m high cross at the top of the dome. The famous organ has 3882 tubes and 43 registers. Besides the main hall of the church, we also visited the Anton Durcovici Memorial, a martyred bishop and a victim of the communist system, and the basement hall, used for various conferences and performances. In the end, we climbed onto the roof of the cathedral, where we enjoyed a beautiful city panorama.

The fourth tourist attraction was Casa Dosoftei (The House of Dosoftei), also called Casa cu Arcade (The House with Arcade), due to the five arcades on the porch. Today, the house houses the old literature section of the Museum of Romanian Literature in Iasi.

The Church of St. Nicholas the Prince

Next to it is the Church of St. Nicholas the Prince, built by Stephen the Great between 1491 and 1492. Unfortunately, the church that today sits next to the Dosoftei House is not the one built by the ruler. The original one was demolished and rebuilt about 400 years later by the French architect André Lecomte du Noüy. I can write about the church of St. Nicholas the Prince until the end of the internet, but I recommend you confidently turn to a guide who can transpose you into the Turkish-occupied and desecrated history of the church. 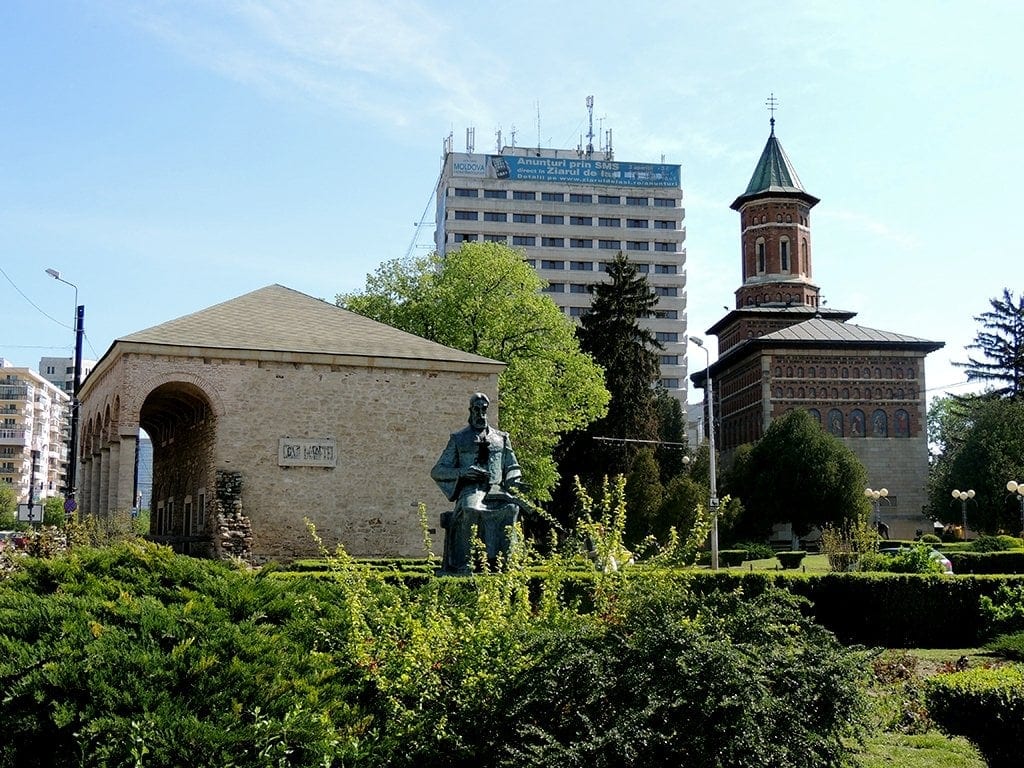 Did you know that almost all the lords of Moldova were anointed here, from Despot Voda to Grigore Alexandru Ghica? Hence the name of Sfantul Nicolae Domnesc (St. Nicholas the Prince).

Also, that this church fulfilled the role of the metropolitan cathedral?

Finally, the icing on the cake and the most awaited moment arrived: the Palace of Culture (Palatul Culturii), the emblem and the pride of the city. But, before stepping with our precious soles onto the marble inside the palace, there was an advertisement break. The ‘product’ discussed was the controversial statue of Stephen the Great, enthroned and towering in front of the Palace of Culture. It was confirmed to us that the gentleman on horseback is really Stephen the Great, despite the lumbering look :).

Did you know the horse’s raised leg symbolises that the ruler died of a wound during a battle?

I don’t know how others were, but I was overwhelmed with emotions when I stepped into the Palace. I admit that I had never visited it before and I waited for the official opening like a child waiting to visit Disneyland.

Disclaimer: This article was originally written in 2012, during the official palace opening, after a period of four years of restoration. Hence the excitement and overwhelming feelings.

Since I can remember, I have always been fascinated by architecture. Obviously, interior architecture was the one that impressed me the most. No photos can reveal the true beauty. That is why I encourage you to visit it yourself.

Of all the halls we visited, the Hall of the Dukes was the one that caught our eye the most. Its grandeur, architectural style, and fresco-style paintings, where we could see in medallions the portraits of all the lords of Moldova and the Kings of Romania, left their visitors’ jaws dropped.

Another piece of good news for the public is that the clock tower is now open for tours. The Clock reproduces the Union Choir every hour. During the restoration, access to the clock tower was facilitated with an elevator. We were lucky enough to find Mr. Ion Cristea on duty. The man behind the clock for nearly five decades; we could hear the passion in his voice even after such a long time in the clock’s service. He told us the story of the mechanism of operation and the elements that compose the clock. great man!
I hope you will be at least as lucky as we were to meet Mr. Ion.

Did you know that the Palace of Culture in Iasi is the last building in the world built in the neo-gothic style?

A ticket costs 40 RON, which is about 10 USD. This price will get you into all 4 museums:

The Museum of History of Moldova,

The Ethnographic Museum of Moldova,

The Museum of Art

The Museum of Science and Technology

You can also opt to visit only one of them, or each at a time, at which an individual rate will be applied. Find all the information you need about rates and opening hours on the official website of the Palace of Culture.

I hardly left the Palace, obviously with the promise that I would return as soon as possible, especially since I did not get to visit anything from the Ethnographic Museum of Moldova.

The last stop, but not the last, was at the Old Cathedral. I was initially wondering where this was. Well, St. George’s Church is located within the ensemble of the Metropolitan Church of Moldavia and Bucovina and served as a cathedral until 1887. In spite of having often visited the Metropolitan Church, this is a detail I never knew. That is why the knowledge of a guide is priceless.
Here we were greeted by Father Archimandrite Dosoftei Scheul, who took us through the’maze’ of the history of this place and explained the significance of the painted icons inside the church.

Like its architecture, the Old Metropolitan Cathedral combines Baroque with Russian-style elements. The richness of the use of details symbolises aspects that can be easily interpreted, and the tumult of colours aims to visually impress the viewer, to render a drama or a tense moment.

Did you know that on one of the interior walls there is a grandiose fresco painting, like the one from the Voronet Monastery, that depicts the scene of the Last Judgment?

Also, on the porch of the church are buried four of the metropolitans of Moldova.

A good article to read is:

Visit Milan in one day

The photo gallery is made by the contribution of Mr Victor Cojocaru and Mr Constantin Ciobanu as well as from the personal archive.