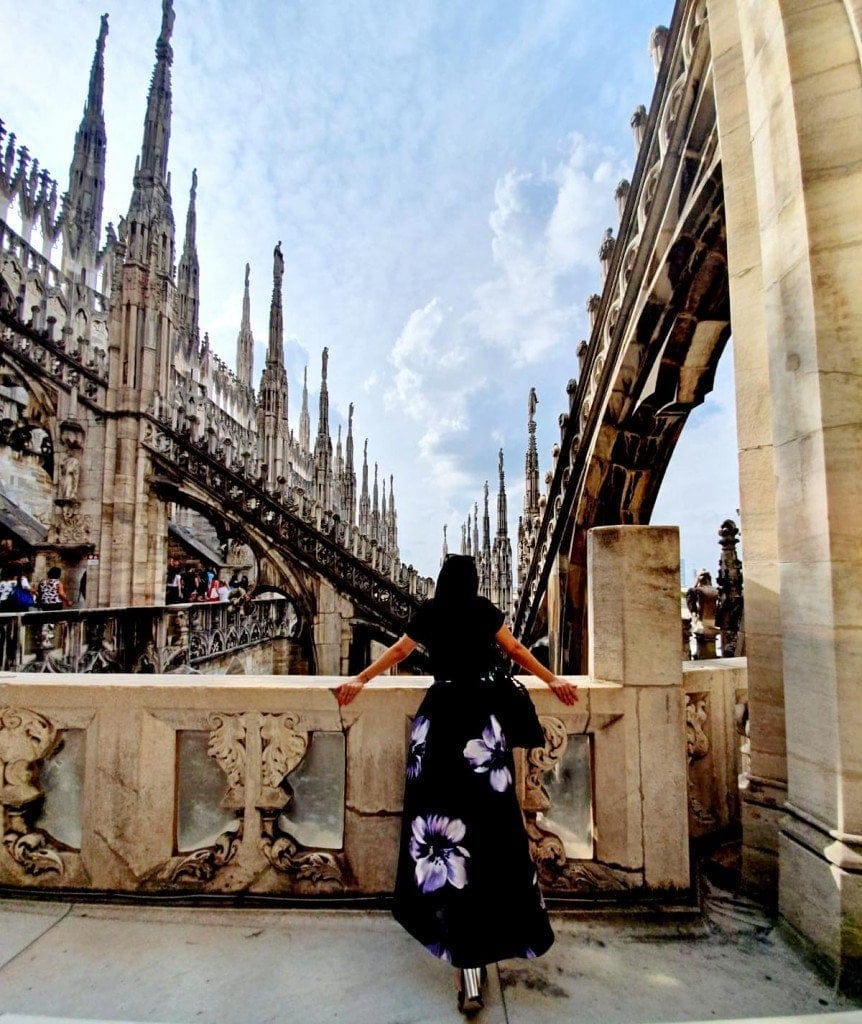 I visited Milan in one day, within a budget. So, in this article, I’ll answer the following questions about Milan, one of the world’s fashion and culture capitals:

Can I visit Milan in one day

Can I visit Milan in one day?

Why Go to Milan?

Which hotel should I stay at in Milan?

What to visit in Milan?

How to Visit Milan Cathedral?

When is the best time to visit Milan?

Why not visit Milan by night too?

The answer is yes! Milan, unlike most cities, has its attractions gathered together. Just to give you a brief idea: The Duomo di Milano, also known as the Duomo di Santa Maria Nascente, the Galleria Vittorio Emanuele, the Teatro Alla Scala, the Armani Hotel, and the Brera District are all in the same area. About 3–7 minutes of walking.

Further on, Chiesa Santa Maria Delle Grazie, Leonardo da Vinci’s Vineyard, and Sforzesco Castle are literally near each other, 15 minutes away from each other.

You should visit Milan if you are an art lover. And by art, I mean everything!

Starting from architecture, sculpture, painting, theatre, opera, music, fashion, culinary art and last but not least the art of living. Believe me, Italians do have a particular way of living life. They are being recommended by history itself and by a large number of artists and designers they gave to the world since the Renaissance era.

Which hotel should I stay at in Milan?

When I go on a city break, I definitely prefer a quiet central hotel, so I can best use my time there in an efficient manner. And because my city breaks have a cultural purpose, I very much enjoy staying in a small hotel with character and outstanding architecture. So, this time I chose Panizza Hotel, delighted by its architecture and because of its proximity to half of Milan’s attractions (Chiesa Santa Maria Delle Grazie, Leonardo da Vinci’sVineyard,d and Sforzesco Castle).

Obviously, there are other cute hotels, but this was my option for the stay.

What to visit in Milan

There are many things to do in Milan in one day. However, I will tell you what I saw and why these points are a must.

Due to my hotel’s proximity, I started with Chiesa Santa Maria Delle Grazie and Leonardo da Vinci’s Vineyard. Althought Sforzesco Castle was also near by, I will leave for some other time. Because the way I saw it in terms of size, I placed it on the same level as the Palace of Versailles, for which you need to dedicate at least half a day alone.

It is a church and a Dominican convent and a UNESCO World Heritage Site. Besides the architectural beauty, the church holds the mural of The Last Supper by Leonardo da Vinci. You can read more about it here. One more thing to mention is that if you want to see the mural masterpiece, you will need to book the tickets in advance. Due to the fragility of the painting, access is limited in terms of the number of people. Here is the official website of the church.

Just across the street is La Vigna di Leonardo (Leonardo’s Vineyard). This is the place where Leonardo da Vinci grew his grapes for making wine while he was working on The Last Supper. During the years that Leonardo spent living in Milan, the city was one of the places in the Western world where the greatest attention was paid to personal appearance, the body, and perfume.

To visit Leonardo’s Vineyard, you can buy the tickets on the spot, and the waiting time is about 30-40 minutes prior to getting in.

Don’t worry! Right next to it is a very nice coffee and sweets place :).

From the outside, Leonardo da Vinci’s Vineyard doesn’t say much. However, once you step into the interior courtyard, it is like stepping into a different world, a fairytale world. It is a very picturesque place, with a bohemian air.

We were lucky to be there in the year (2019) for the celebrations in honour of the 500th year after Leonardo Da Vinci’s death on May 2nd, 1519. Due to this grand celebration, we did not get to see only his hidden vineyard and the dedicated museum, but a special exhibition was opened, allowing us to gain a rare insight into the life and work of the quintessential Renaissance man.

In the second part of the day, I carried on with the Duomo di Santa Maria Nascente, Galleria Vittorio Emanuele, Teatro Alla Scala, Armani Hotel, and Brera District.

I got the thickets in advance online, and I chose the DUOMO PASS LIFT package. You can also buy it on the spot; the lineup is endless, either way!!!! After we stayed forever at the front door, we got the “well-meant” advice to go to the back door because there are fewer people and it is going faster.

The back-door elevator has a capacity for four people only, so it took us ages to get in. But once you’re on the roof of the Duomo di Milano, you simply forget all the effort it took to get there.

The gothic architecture, the imposing towers, the mix of elements, and the infinity of details simply take your breath away. Then… the race for the perfect picture and the best spot starts and here we go again:))))))).

The Galleria Vittorio Emanuele—Italy’s oldest active shopping mall—got me so excited about the photos I was about to take here. I had a clear image in my mind of what they would look like and everything. Yet my home plan did not match the on-the-spot situation. I never understood how some people from Instagram got so lucky and they had the chance to take a proper picture. They basically look like they own the place. In my case, I was considering myself lucky enough if no one was standing right in front of me while taking pictures.

By 4 PM, we arrived at the Teatro Alla Scala, which is just across the Galleria Vittorio Emanuele. I bought the tickets via Museo Teatrale Alla Scala, and Ichosee the GUIDED VISITS OF THE THEATER package. Hence, we got the chance to see more than the museum and the stage from one of the balconies. I had the opportunity to get into the foyer, the royal box, the historic boxes, and even “backstage” to explore the stage’s mechanised movement system. I insisted on visiting this theatre because I see it as a great honour just to be there, even without seeing any show. It’s the world’s most famous and grandiose stage. The biggest world artists perform there, so please add this to your “must-see” list.

Did you know that the stage’s mechanism movement system has four floors under the stage?

The rehearsals are taking place every day. The staff only had about 3 hours to prepare the decor for the evening show. So imagine how much work it takes to set up the decor on each floor stage!

Note: Those who purchase tickets for the main floor never meet those from the other six tiers. This was a statement about social class division.

In the evening, we got lost in the Brera District’s narrow streets, the artistic heart of the city, but not without making a short stop at Brera Art Gallery. The neighbourhood is packed with restaurants and coffee shops, so don’t skip the chance to have a great meal there. We opted for Hosteria Della Musica.

How to visit Milan’s Duomo

On heels… If you want to live in Rome, live like a Roman. In my opinion, Milan is not the city to act like a tourist. It is one of the fashion capitals, so pay respect to that. Fashion is an art over here!

Personally, I was fascinated by every person passing by. Italians have a native sense of aesthetics. There’s no ugly man whatsoever. Even the “ugliest” man is actually quite handsome in a particular way just because of how well they are dressed, the attention they are paying to details, and the quality of the accessories they are wearing, especially when it comes to leather goods.

Regarding leather goods, Italy has a strong tradition and an evolving industry. You can tell just by the multitude of family stores.

The best time to visit Milan

Visit Milan in September, or at any kid’s school time. I’m not sure if all the European countries follow the same school schedule, but a good guideline is the UK school holiday calendar (School Terms). Why UK? Lots of travel and airline agencies are establishing their prices according to this calendar, and this is because British consumers are big consumers when it comes to travelling and vacations.

Why visit Milan by night?

Because of the silence of the city, because you get to see another face of its beauty, plus you are more relaxed knowing it is already night and you do not have any reason to rush. Then end the evening with a glass of wine and a cannoli at the Bar Duomo, enjoying the view and the music performed by the street artists.

Last year I visited Barcelona, how much fun I had you can see on